“Before we learn w, let’s practice the last slanted lowercase letter we learned: y,” I declared.

“But I already know how to write a lowercase y. See?”

“Oh yeah!” he said remembering. He proceeded to print lowercase y several times on his dry-erase board.

“Not so fast. I’d like to practice writing some words with a lowercase y. Now, your name doesn’t have a lowercase y in it, but my first name does. It may not sound like a y is at the end of it, but there is.”

“Do you know what my first name is?”

Ari stared at me blankly. Then his face lit up, “Shubitz!”

MOMMY!?!??! This kid knows my cell phone number. he knows our address. I spent so much time teaching him these things — and making sure he knew my last name was different than his — that I didn’t realize he didn’t know my first name!

“It’s Stacey,” I replied. I wrote it on my dry-erase board and showed him, letter-by-letter, how to spell my first name.

Nice try, but you didn’t, kiddo.

Ari has been going through a mommy phase for the past week and a half. He calls my name what seems like 1,000 times a day. Over the weekend, we drove to a state park about 30 minutes from our home. I sat in the third row of the minivan, which meant (since he’s still rear-facing) Ari was looking at me for the entire drive. Despite being face to face, he kept saying “Mommy… Mommy… Mommy…” over and over. I’ll be honest, it was annoying.

Later in the day, I came across the image of a little girl, who looks a touch older than Ari, crying in a still photograph. She needs to be consoled, but that’s not happening. Like so many people, this photo shattered my heart since — unlike Ari who is going through a stage — she doesn’t feel secure. No one to hug her and promise her everything will be okay. Because it isn’t. None of this is okay. Separating innocent children from their parent(s) is cruel.

After we returned home from celebrating Father’s Day at our favorite restaurant, I hopped on the elliptical for a 75-minute workout. I selected “Face the Nation” from my DVR recordings. I found myself feeling ill with every passing moment the Southern border parental separation issue was covered. By the end of “Face the Nation,” I turned on an episode of “The Daily Show” I missed last week just to keep myself from being nauseated.

When I got off of the elliptical, I marched myself down to my home office and opened an old picture book manuscript, WAITING FOR PAPI, that I shopped around to agents throughout 2015 and 2016. WAITING FOR PAPI offered a glimpse into the lives of undocumented children in American society. I wrote it after teaching in a community where some of the students’ fathers were placed in a detention center because they were undocumented. One of the girls (whose father was detained) was supposed to be in my fourth-grade class the following school year. However, she and her family were deported to their native country since her parents were in the United States illegally. For some reason, I couldn’t bring myself to remove her desk from the classroom when I set up my classroom. I kept the desk to remind me of the unease families without papers feel. These folks live in constant fear of deportation.

The desk stayed in the corner of my classroom. It served as a promise to one day tell her story. However, WAITING FOR PAPI received more rejections than I could count. The personalized rejections stated the subject matter was too mature for young children. (I tried revising as a middle-grade novel, but it wasn’t the form I envisioned for this book.) One agent even told me that no parent would ever buy a book about families being separated. As a result, I stopped trying to convince literary agents how American parents needed this story to help their children understand the lives of others who are not in this country without the necessary papers to live freely and comfortably.

But that was in 2015 and 2016. Unfortunately, in 2018, the separation of families along our Southern border has become a reality. Unlike many Americans, I’m not shocked that “this is what our country has become.” I saw what was happening in the community where I taught in 2008. I hate to say it, but what’s happening doesn’t shock me.

I began a new document after I finished reading the old manuscript, which — by mid-2016 — was a watered-down version of the story I wanted to tell. I don’t have a law degree so I can’t provide legal assistance to families in need. I don’t live close enough to the Southern Border to do anything concrete. But what I can do is revisit the story of the girl whose desk remained empty in my classroom during the 2008-09 school year. Her story deserves to be told. Once the manuscript is finished, I’ll summon the courage to query it. It is my hope to find an agent  (and a publisher) who believes this story is worthy of being told in a 32-page picture book. Not only do this country’s youngest citizens need a window into the lives of undocumented children, but undocumented children deserve mirror books.

This story has been percolating inside of me for a decade. By the time it ever goes public, Ari will be long past this mommy stage. So for now, I’ll keep writing and will enjoy being adored by my son. I will not allow myself to wish away what many other parents yearn for.

Dahlia Lithwick and Margo Schlanger of Slate compiled an excellent list of ways everyday people can help fight separation at the Southern border. Click here to read it now.

SELF-DIRECTED PLAY: You know how they say you should never turn your back on the ocean? Well, you should never turn your back on a toddler. (Wait, I already knew that!) Well, I “turned my back” on Isabelle this morning while we were at her school. She was being looked after by her teacher and other parents when I left the room for 30 seconds to get her coat from the hallway. When I returned, I didn’t see her.

“Where’s Isabelle?” I asked, slightly worried. I say slightly since there’s only one egress from the classroom and I had been in front of it. She couldn’t have left.

Her teacher scanned the room with her eyes. Once she found her, she pointed to the corner. “She’s over there, mommy.”

I looked. It seems Isabelle made herself busy with a tea party while I was out of the room. So what did I do? I put our departure on-hold and joined her! 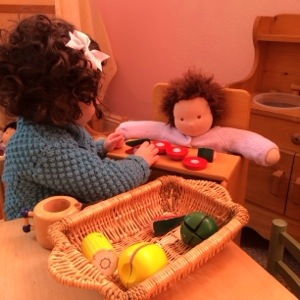 MOMMY-DIRECTED PLAY: Yesterday I bought Isabelle an opposites puzzle we’ve turned into a game. It’s a great way to practice fine motor skills, speech, vocabulary, and concepts. While she has a long way to go ’til she masters all of the words and concepts in this puzzle, she selected to play with it this afternoon. I was kind of surprised since it seems a little academic to me. But I guess she likes it. (I’m not complaining.) Here’s a look at her making an opposites match:

ISABELLE-DIRECTED PLAY: My mother-in-law came into town today, which allowed me to stow away in my office and get some work done. I came out of my office to check on the two of them and discovered quite a scene. The two of them were sitting on the floor together, complete with a tray of pretend cookies and cotton inside of a sugar bowl. Isabelle had a serious look on her face when I approached. She looked at me, picked up the tea pot, and poured each of them another cup of tea.

“She didn’t want to invite anyone else,” my mother-in-law said referencing the fact that the usual menagerie of stuffed animals wasn’t joining them.

I snapped a photo and left the room, remembering how Isabelle told me she wanted to have a tea party with Grandma later in the day. I guess she remembered her grand plan.

Every now and then I like to write notes to the FutureMe.  Essentially they’re a high-tech way of holding myself accountable in the future.  After reading “Using Captioned Media as Mentor Expository Texts” by Strassman, MacDonald, and Wanko this morning, I remembered something I long told my students’ parents to do.  TURN THE CAPTIONS ON when you’re watching TV at home.  The authors of this article cited eight research studies that confirmed the following:

The results of these studies show that captioned television aids the development of vocabulary and comprehension (2010, 197).

Therefore, I wrote a “note to self” this morning using the FutureMe service. I wrote:

Take the advice you gave to your students’ parents when you were a classroom teacher.  Be sure to turn the captions on so that TV watching is enhanced for Isabelle.  Multiple research studies confirm what you’ve known for years.  Comprehension and vocabulary development will increase by turning the captions on.  So… get the TV manuals out and figure out how to put the captions on today!

My letter will arrive in 2014 when Isabelle is three years old.  Until then, she shouldn’t be watching that much television, so I won’t be turning the captions on just yet.