I’ve shown Isabelle ultrasound pictures from my 12-week and 16-week scans. She’s been less than impressed when looking at the images of her future brother since she has a hard time conceptualizing how the outline on the screen can actually be a person. Even though she knows a baby starts out as small as a poppy seed and grows into something the size of a watermelon, she doesn’t truly understand how much time it takes for a baby to develop.

I had an anatomy scan of the baby yesterday since I’m almost 20 weeks into my pregnancy. As usual, the Maternal Fetal Medicine Department sent me home with a “parting gift” (i.e., a CD-ROM of pictures and videos). I was hesitant about showing the pictures and videos to Isabelle since I know she hasn’t thought much of the previous scans. In fact, I wasn’t even going to do it. But then she snuggled up on my lap before she left for school this morning. While she was there, asking where the baby was (Even though she knows he’s in my belly, not my armpit!) I found myself telling her where the baby’s head, torso, and legs were.

“Because I had an ultrasound yesterday. Someone took pictures and videos of the baby so I know exactly where he is. Do you want to see?”

I started with the videos since they capture her baby brother opening and closing his mouth. However, each of the videos was two to three seconds long so she wasn’t disappointed she didn’t see that much. (I couldn’t blame her.)

Next, I showed her his profile.

I pointed out his nose, his mouth, etc. She was unimpressed.

I thought the image of his feet next to one another would excite her. 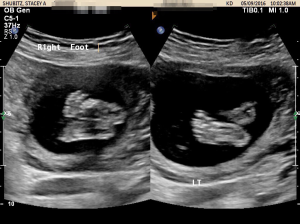 I was wrong. She didn’t seem to care that he had ten toesies. (I sure did!)

I didn’t think anything would excite her as I flipped through the images, but I was wrong. THIS photo made her burst out laughing:

I have no idea what it was about seeing his leg that made her laugh so hard, but she did. And not for just a second. She chuckled for a good 30 seconds!

“Why is that so funny?” I inquired.

Yes, he does. And thankfully, he has two of them.

Maybe I’ll take her along with me for my 32-week ultrasound. That’s when the techs can get a good 3D image. We’ll see if that impresses her. (Hopefully, the 3D images won’t creep her out like it did to me when I was pregnant with Isabelle nearly six years ago.)

I'd love to hear from you! Please leave a comment below. Cancel reply