I’ve shared two of the following books with Isabelle.  The other two I’ll share with her in the week to come.  I just love all four of them.  A couple of them traveled to Washington, DC with us this past week.  All four of them will be in our bag for our next overnight trip.

Why I like it:  The idea of unplugging sounds trendy, but few people do it.  Everywhere I turn, I’m reminded of the importance of disconnecting from technology a little more and focusing more on human interactions.  This is the story of a robot who realizes he needs to unplug to experience life.  Rather than learning from a computer, he escapes his apartment and comes to discover how many incredible things are happening in the real (not virtual) world.  So many people are virtually connected these days, but are lacking in face-to-face interactions.  Texting, Facebook, Twitter, and Instagram have become the new ways to feel connected without engaging in three-dimensional interactions.  And it’s sad.  I love technology just as much as the next person, but in the past year I’ve begun to realize that it shouldn’t be a substitute for living life.  This book serves as an excellent conversation starter with any child who is more connected to TV, video games, the computer, or a smart phone than the are to others.

What Isabelle liked:  In typical kiddo fashion, she liked Doug the robot, who is drawn like a cartoon character.  She doesn’t watch cartoons, but was drawn to him.  (He kind of reminds me of Elroy from “The Jetsons.”)  She especially liked the scenes in the park when Doug makes friends with a little boy.  (I think that’s probably because she loves to play outside.)

NOTE: I’ll be blogging about this book next Thursday, April 25th when I review it as part of Random House Children’s Book’s UNPLUG & READ Blog Tour. 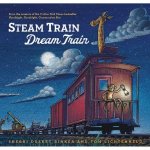 Why I like it:  Gorgeous illustrations.  Lyrical text.  This book is a delight for the ears and the eyes page after page after page.  I appreciated the way the book names the cars in the train (e.g. reefer car, tanker cars, hopper car, caboose), which helps make it a teaching tool about as well.  I’ve already recommended it to two people with two year-old sons who love trains.  It’s one of those books I know I’ll be recommending to anyone whose kid loves trains as the weeks and months go on!

What Isabelle liked:  Isabelle loves animals and trains.  This book combines both.  She sat well through the book’s rhyming text, which I read to her before nap time.  She likes listening to this in conjunction with Trains Go! by Steve Light. I have a feeling it will eventually become a pre-bedtime favorite.

Why I like it:  A little girl goes to Kindergarten and LOVES it.  However, she realizes her mom is a little sad now that she’s no longer at home with her all day.  Therefore she invites her mother to be a guest in her Kindergarten class for a day.  However, her mother does everything wrong.  She cuts in line, doesn’t remove her shoes, and calls out the answers.  She violates almost every rule the kids in Kindergarten have come to learn, understand, and follow.  It’s a humorous look at how it takes all of us time to learn new things.

The book also has lots of great craft moves.  Hence, I’ll be blogging about it over at Two Writing Teachers in the next few weeks.

Why I can’t wait to share it with Isabelle:  As she gets older, an I prepare her for school, I think it will be a great conversation starter about the importance of following the rules of school.  The book is comical since the person acting out is the mother who is a guest in the classroom for a day.  Therefore, I think this book will be a humorous way to talk to Isabelle about how it takes practice to learn to do something new well.

Which Is Round? Which Is Bigger? (KidsCan Press) by Mineko Mamada

Why I like it: I’ve been on the lookout lately for books that teach basic concepts in interesting ways.  Enter Which Is Round? Which Is Bigger?, which is a book that makes you really think about the concepts of shape and size.  For instance, there’s a picture of a a goose and a peacock.  The top of the page spread says “Which one is bigger?”  It looks like it’s the duck, but then you turn the page and the peacock’s feathers are spread out thereby making it much bigger than the duck.  But it’s not just size and shape.  It’s also speed, length, color, and height.  For instance, another page asks “Which one is red?”  There’s a monkey holding an uncut red apple and a monkey holding a whole watermelon.  On the next page it says: “Which one is red? What do you think?” and it shows the inside of each fruit, with the apple being beige and the watermelon being red.

Why I can’t wait to share it with Isabelle:  Let me be honest, I spend a lot of time exposing Isabelle to words and quality literature.  Therefore, I haven’t spent as much time (as I probably should have) with colors, numbers, and the ABC’s.  Don’t get me wrong: she has lots of books about colors, numbers, and the ABC’s.  In fact, Priddy books are some of our favorites.  BUT, it just hasn’t been what I’ve stressed. Therefore, books like this will help me not only teach her basic concepts, but it will allow me to ask her similar types of questions as we walk through our daily lives.

This meme was started by Sheila at Book Journey and the kids’ version has been adapted by Jen and Kellee at Teach Mentor Texts.

I am a literacy consultant who focuses on writing workshop. I've been working with K-6 teachers and students since 2009. Prior to that, I was a fourth and fifth-grade teacher in New York City and Rhode Island. I'm the author of Craft Moves (Stenhouse Publishers, 2016) and the co-author of Jump Into Writing (Zaner-Bloser, 2021), Welcome to Writing Workshop (Stenhouse Publishers, 2019), and Day By Day (Stenhouse, 2010). I live in Central Pennsylvania with my husband and children. In my free time, I enjoy swimming, doing Pilates, cooking, baking, making ice cream, and reading novels. View all posts by Stacey Shubitz

I'd love to hear from you! Please leave a comment below. Cancel reply